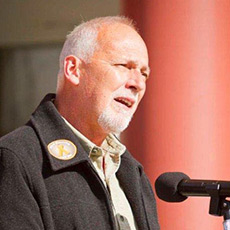 On April 3, 2009, Ryan Huxley was working in a nursery driving a John Deere Gator when it crashed into a parked, 40-foot, semi-trailer after hitting a mudhole. It seems Ryan had looked back to see how high the mud had sprayed, having a bit of fun with the machine. It was in those mere seconds that his utility vehicle veered into the trailer.

For Ryan’s family, it has been a painful nine years since their 29-year-old son lost his life.

“The day Ryan died, I was on my way home from work when the Abbotsford Hospital called to say there was an incident,” says Ryan’s father. Phil Huxley. “Ryan worked in a nursery driving a John Deere Gator, so I thought, at worst, it was a broken arm or leg.”

At the hospital, the family was told they could spend time with Ryan in intensive care while waiting for his heart to stop for the last time. After about an hour, Ryan’s pulse started to rise. “I leaned over, kissed him and said, ‘Go with God. Ryan, I love you,’” says Phil.

Ryan’s pulse instantly dropped, then gradually got slower and slower until his heart stopped.

The family was shocked to learn Ryan was gone. His sister, fiancée, and stepmother sat in stunned silence, disbelief, and tears. Nobody ever imagined this could happen. Ryan was supposed to get married only a week later.

The Huxleys are doing as well as can be expected, though each day is still hard and they miss Ryan terribly. Phil works hard to focus on the positives: Ryan’s eyes could have benefited up to eight people thanks to transplant; his employer instantly changed the way equipment was used at the nursery; and rules are now in place across B.C. for using and maintaining all-terrain vehicles (ATVs) in the workplace.

For Phil, worker safety is all about ensuring proper training. For the equipment Ryan was operating, this means workers know not to spin the machine’s tires, and that they realize what can happen because of horseplay or not paying attention. “We must be safety oriented,” says Phil. “We must work on this — employers and employees — together — preventing incidents.”

Phil also wants to spread the word about organ donation. “If we all signed up, there might be no waiting list at all, and there certainly wouldn’t be any waste. What a positive thing, in death, to be able to help someone else.”

Lastly, Phil encourages people to say ‘I love you’ to those around you “… as often as you can,” adding, “You never know when things might change.”