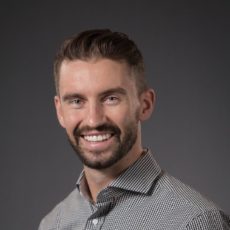 Mike Shaw’s passion for freestyle skiing was everything. He lived and breathed skiing from a young age. By 16, Mike had joined the Silver Star Freestyle Club in Vernon, BC, and was hooked on competition, taking his skiing to new heights. Literally. “Doing flips and twists, on massive jumps, the feeling of flying was incredible!”

But, as Mike explains, “My passion is a double-edged sword.” In 2007, he left competitive skiing due to broken bones and torn ligaments. By 2013, Mike had bounced back – not as a professional skier, his original dream – but as a coach to some of Canada’s top halfpipe skiers.

On December 16, 2013, while coaching his athletes in Colorado, the 27-year-old suffered an accident that would change his life forever. While performing a routine trick Mike had completed countless times, he miscalculated his jump causing him to land in such a way that dislocated his neck, instantly paralyzing him from the neck down. Before he had even stopped sliding, Mike already knew what had happened. “I was wondering why I couldn’t stop sliding down the hill or get up and then it hit me… a hard hit to the face followed by a sharp pain in my neck. I knew instantly I was paralyzed.”

Mike recalls his instinct was to not make the jump. “On the way into the jump, I feel a gut-sinking feeling. My instincts were telling me something was wrong, I heard my inner voice telling me not to go, but I ignored it.”

Almost immediately following surgery in Denver, Mike entered intensive rehab at Vancouver’s GF Strong Rehabilitation Centre where he made miraculous improvements in his recovery despite being told he would likely never walk again. But Mike was determined to get back on his feet, get strong and get back to his life – to his independence.

The following two years post-crash were loaded with peaks and valleys of good times and hard times. His determined and gracious character would ultimately be his saving grace. Mike approached his recovery like any other challenge he’d faced, however, this time he had a foundation of gratitude. And he made miracles happen.

Within four months, Mike was back on snow in a sit-ski. At the one-year anniversary of his crash, Mike stepped back into the same pair of skis he’d been on 365 days before, surrounded by friends and supporters. At 17 months post-crash, Mike participated in the Wings for Life World Run as an ambassador for Spinal Cord Injury. Mike now travels around North America working with students and athletes to help them improve their safety and performance. He speaks to large groups and continues to inspire the next generation of young people.

“If I can help prevent one accident like his from happening to someone else, I will be fulfilled.”

Mike’s second chance at life has given him the opportunity to share his story and motivate others. He is faced with challenges everyday related to his spinal cord injury. However, he strives to achieve more and keep pushing his personal limits. Most of his progress he would attribute to attitude and effort, and being grateful every day.

Mike believes healing through grief is important. And the practice of daily gratitude is an enormous part of that healing. Mike expresses his gratitude to share his story at the Day of Mourning today.

“I’m grateful to be part of the New and Young Worker Program with WorkSafeBC. Together, we will make a difference and prevent unnecessary work-related injuries, preventing the emotional pain and hardship that families have to endure when someone they love is lost.”