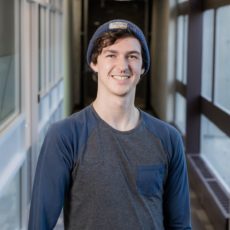 When Jack Thomas thinks back to that day in 2015 when he lost his arm, what he remembers most are the warning signs

“There were so many things telling me I shouldn’t be at work that day,” he says. A case of bronchitis made him consider calling in sick; his boss encouraged him to stay home, but he’d only been there two months and didn’t want to let anyone down; another employee had offered to take his shift but he declined. “At the time, I didn’t listen to my gut instinct and I didn’t think about my right to refuse work if it didn’t feel right to me.”

As Jack was working at a recycling facility in Port Coquitlam where he was cleaning out the sorting conveyer, the belt suddenly started up and his sleeve was caught in the exposed roller. No one else was there to see what happened next.

“When I woke up, I made an effort not to look down so as not to panic,” he says. “I ran outside and yelled for help, and asked someone to grab my hand. I had my eyes shut and couldn’t feel my arm, so I asked the man if [it] was there.” That’s how Jack found out that his right arm from the elbow down was gone.

“I was 17 and it was a summer job,” he says. “I didn’t think at all about making my own safety a priority. Now I understand that it’s the employer’s responsibility to make sure the workplace is safe, to explain any potential workplace hazards and to mandate proper supervision on the job.”

As Jack, an avid drummer, lay there waiting for the ambulance and taking in the gravity of his injury, he clung to the knowledge that one of his musical heroes, Def Leppard drummer Rick Allen, had suffered a similar loss and managed to keep playing.

He decided there and then that he too wouldn’t let his injury derail his dream of becoming a professional musician and audio engineer. Now 19, the Port Coquitlam native is studying at Vancouver’s Nimbus School of Recording and Media to do just that, along with recording his own alt-metal band’s first album. His drum kit, donated by the instrument manufacturer Roland, has been specially outfitted with programmable kick-drum pedals that allow him to achieve exactly the sound he wants.

“When it comes to drumming you have to get to a point where you can control each of your limbs separately,” says Jack. “Funny enough, now that I only have to focus on one hand, my timing has improved so much and I am able to figure out much more complex things much faster – and that’s really helped with a lot in life.”

It can be strenuous at times, especially since he had been right-handed. “It’s still quite a bit of brainpower being used to focus on my non-dominant hand,” he says. And some days are harder than others; the pain is almost constant. “If I could trade it all to get my arm back, I’d do it in a heartbeat,” he says. “I have to live with this for the rest of my life.”

Jack attributes his resilience to the support of his high-school music teacher, his friends, and particularly his family — his mom, older brother and sister, and grandparents, who live only three doors down.

“We’ve all been so close-knit since this happened,” he says. “My mom has been my support my entire life. Everything I am is because of her. If I have a bad day, it’s a very rare thing that I don’t go and talk to her and leave feeling a little better.” Plus, he jokes, “any looks I have come from her.”

While he’s come a long way in the three years since his accident, Jack reflects often on how different his life might have been. He wants all young workers to know they have the right to speak up if anything in the workplace feels unsafe. He hopes telling his story will help make young workers aware of the possible hazards in their own workplaces, and spur them to make safety their number-one priority. They need to know that safety on the job is their right.