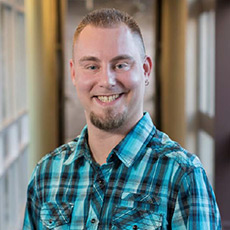 At first glance, Mark Johnson looks like a regular guy, living where he was born and raised, who “had it made” at 21. Then his life turned upside-down.

Nine months into a sawmill job, Mark was trapped in heavy machinery and nearly died.

“I was cleaning scraps of wood from a conveyor belt under the wood chipper when my left arm was caught in the moving roller,” says Mark. He screamed, but no one heard because of the noise of the machinery.

“After maybe 20 minutes, I was passing out from blood loss. I knew I’d die if someone didn’t help me, so I threw up a prayer to God,” and said “Please God make it stop!” Miraculously, the conveyor belt stopped even though no one had touched it.

Other workers heard the screams, sawed off the belt, unbolted the roller, and freed him.

“There was no sensation in my arm,” says Mark. “But my back hurt a lot where all the skin was chewed off and pieces of my shirt were ground into the flesh.”

Waking up in hospital, he learned that his arm “had been pulled out of its socket at the shoulder, detaching all the muscles and tendons. The only thing holding everything together was my skin.” Despite multiple surgeries, little could be done.

“The doctors decided I was an amputee without a complete amputation and wanted to remove the arm, but there was no way I’d let them do that.”

Mark kept his arm, but today has only limited wrist movement and enough shoulder function to tuck the arm behind his back.

“I’ve worked to build myself back up,” he says. “I’m back to playing slo-pitch baseball, soccer, and ice hockey. For slo-pitch I bat one-handed, and can hit the ball pretty far. I also catch and throw with the same arm.”

Still, Mark’s life is very different, and what happened in the sawmill can be hard to deal with. “It was really tough the first year or so. I was suicidal, but I didn’t act on it because of how it would hurt my parents,” he explains.

“Eventually, I decided to get on with my life. I went back to school and earned diplomas in business office and call centre skills.”

From the outside, Mark made it look easy, but he’s had a hard road back.

Thinking about it, he points to workers feeling pressure to produce on the job and how this affects safety. “It’s especially true for young workers. They want approval from older workers and their boss. But that can come with a cost,” he says.

“But whether they’re young or old, one thing applies to all workers. You have the right to speak up if you see something unsafe or are asked to do something that is dangerous. What counts most on the job is staying in one piece and getting home in one piece.”