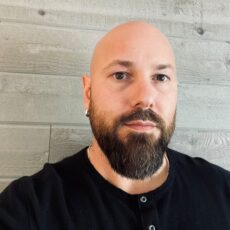 The day that changed his life forever

At his first job, all Michael Lovett wanted was to earn the money to buy his own vehicle. Instead, a serious workplace accident forced him to walk on an artificial leg for the rest of his life.

Active and fit, Michael had just finished high school and landed a job at a Mission sawmill. The 18-year-old was eager to please, and wanted to impress his co-workers with his great work ethic. He started sorting lumber on the green chain, then moved to the clean-up crew on the graveyard shift.

“It was a big, intimidating mill and I wasn’t watched,” he says. “I was trained by a guy my age on cleaning the conveyer, but really kind of thrown into the job. I was told to clean the conveyer while it was running so it would take less time. I didn’t think about the possibility of getting hurt. I just wanted to get my job done.”

On a rainy November night, Michael jumped about seven feet from the conveyor after cleaning it. He slipped; his boot went into the conveyer’s roll feeder, and it started dragging his body into the moving machinery. Michael’s left leg was trapped between the large, heavy roller and the drive chain.

“I was very scared,” he says. “Thinking that I’d have to watch myself die and that I’d still be alive when the roller finally went over my head.”

Suddenly, a link broke off the engine’s drive chain, and the machine stopped before completely sucking Michael in. “That link breaking is the only reason I’m here today,” he says.

It was 3:30 am and pouring rain outside. Michael’s calls for help went unheard and it took about a half-hour for help to arrive. The rescue team sorted through machine parts and log bark to find bits of his leg.

Michael was in the hospital for a month. He sustained significant damage to his knee and his leg had to be amputated. He had nine surgeries, 12 blood transfusions, and a metal rod inserted in his thigh. He’s undergone extensive, painful physiotherapy, with razor-sharp pain as he learned to walk on the artificial leg.

Now, every morning, Michael puts on a liner over his stump, then his prosthesis. He can’t walk very long without needing a rest, and still experiences pain. “This is something I have to live with,” he says. “I was a wrestler and played soccer. I used to be very active, and a lot of that’s been taken from me.”

What Michael has gained, is the opportunity to tell others what he went through. Speaking at schools and other places about young worker safety, he has made nearly 700 presentations to 40,000 people in all parts of the province.

Michael’s message is simple: Young workers, and all workers, have the right to instruction, training, and supervision while on the job. If you’re unsure about something, ask questions. It could save your life.

“Safety is everyone’s responsibility. So if you see something unsafe and you don’t want to speak up or make waves, do so. You have rights, and that’s what will bring you home safely at the end of the day.”